1) As usual, housing economist Tom Lawler's forecast was closer to the NAR report than the consensus. See: Lawler: Early Read on Existing Home Sales in March. 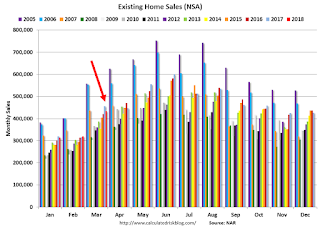 Sales through March are down about 2% from the same period in 2017.   This is a small decline - and it is too early to tell if there is an impact from higher interest rates and / or the changes to the tax law on home sales.