From Aaron Terrazas at Zillow: December Case-Shiller Results and January Forecast: Why 2018 Looks A Lot Like 2017


The familiar patterns in the housing market that emerged in the second half of 2017 – lots of demand from home buyers, limited supply of homes available to buy, quickly rising prices and slow but steadily deteriorating affordability – are continuing to shape the start to 2018 as well.

Among cities included in the 20-city index, Seattle, Las Vegas and San Francisco reported the highest year-over-year gains in December, at 12.7 percent, 11.1 percent and 9.2 percent, respectively.

The Zillow forecast is for the year-over-year change for the Case-Shiller National index to be slightly larger in January than in December.   Zillow is forecasting a smaller year-over-year increase for both the 10-city index, and the 20-city index in January. 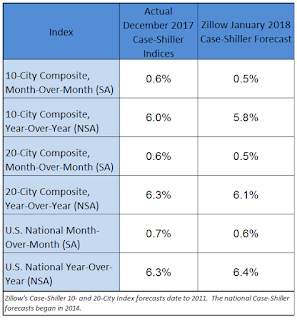