The key report this week is the February employment report on Friday.

10:00 AM: the ISM non-Manufacturing Index for February. The consensus is for index to decrease to 58.8 from 59.9 in January.

8:15 AM: The ADP Employment Report for February. This report is for private payrolls only (no government). The consensus is for 203,000 payroll jobs added in February, down from 234,000 added in January. 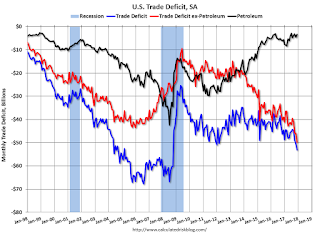 8:30 AM: Trade Balance report for January from the Census Bureau.

The consensus is for the U.S. trade deficit to be at $55.1 billion in January from $53.1 billion in December.

3:00 PM: Consumer Credit from the Federal Reserve. The consensus is for consumer credit to increase $17.8 billion in January.

8:30 AM ET: The initial weekly unemployment claims report will be released.  The consensus is for 220 thousand initial claims, up from 210 thousand the previous week. 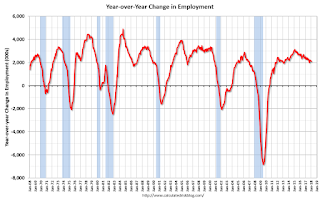 The consensus is for the unemployment rate to decrease to 4.0%.

In January the year-over-year change was 2.114 million jobs.