Earlier from the BLS: Regional and State Employment and Unemployment Summary


Unemployment rates were lower in February in 7 states and stable in 43 states and the District of Columbia, the U.S. Bureau of Labor Statistics reported today. Fifteen states had jobless rate decreases from a year earlier and 35 states and the District had little or no change. The national unemployment rate was unchanged from January at 4.1 percent but was 0.6 percentage point lower than in February 2017.
...
Hawaii had the lowest unemployment rate in February, 2.1 percent. The rates in California (4.3 percent), Maine (2.9 percent), Mississippi (4.5 percent), and Wisconsin (2.9 percent) set new series lows. (All state series begin in 1976.) Alaska had the highest jobless rate, 7.3 percent.
emphasis added 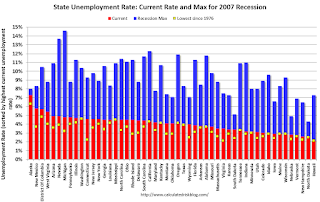 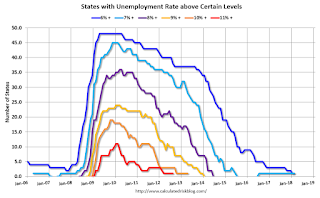