This gives a total of 4.97% delinquent or in foreclosure.


Today, the Data & Analytics division of Black Knight, Inc. released its latest Mortgage Monitor Report, based on data as of the end of January 2018. This month, Black Knight looked at the impact of recent interest rate rises on home affordability. While affordability remains better than long-term averages nationally, home prices at the lower end of the market are less affordable than the national average, particularly for those in lower income levels. As Black Knight Data & Analytics Executive Vice President Ben Graboske explained, the root of the issue has been the consistently higher-than-market-average rate of home price appreciation among properties in the lowest 20 percent of home prices nationally.

“Prices on Tier 1 properties – those in the lowest 20 percent of home values – have been appreciating at a faster rate than all other tiers for 67 consecutive months,” said Graboske. “The annual rate of appreciation for these homes is 1.9 percent higher than the market average, and more than 3.6 percent higher than that of properties in the top 20 percent of prices (Tier 5). Larger overall increases in value among lower-priced homes is not just a recent trend, though; the same dynamic is observed when looking back over the past 15 years. While the nearly 50 percent increase in the median home price over that period has significantly outpaced the approximately 40 percent growth in the median income, lower interest rates today have more than offset that difference. However, according to Census Bureau data, income growth in the lower quintiles has not kept up with the higher ends of the market. This has clear implications for home affordability in this segment of the population, even more so in light of the 43 BPS increase in interest rates seen in just the first six weeks of 2018.

“Overall affordability remains better than long-term historical averages, even taking the recent rate jump into consideration. Currently, it takes 23 percent of the median income to purchase the median home nationally, which is still 1.9 percent below the averages seen from 1995-2003. But those in lower income levels are much closer – if not above – such long-term benchmarks. It seems evident that further affordability reductions from rising interest rates could put more pressure on lower-income buyers by increasing competition for lower priced homes, as borrowers’ overall buying power is diminished.”

The spike in 30-year fixed mortgage interest rates also had the effect of cutting the population of borrowers with interest rate incentive to refinance by nearly 40 percent in 40 days. Approximately 1.4 million borrowers lost the interest rate incentive to refinance in just the first six weeks of 2018. This leaves 2.65 million potential candidates who could still both benefit from and likely qualify for a refinance at today’s rates, the smallest that population has been since late 2008, prior to the initial decline in rates during the recession. This represents another challenge to a consistently shrinking refinance market. Refinance lending declined significantly in 2017, with the total number of originations down 29 percent, and total volume down by $355 billion, a 34 percent year-over-year decline.
emphasis added 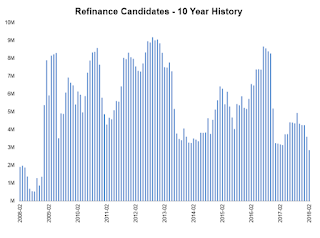 This graph from Black Knight shows the Black Knight's estimate of the number of refinance candidates.


• Closing out a very steady second half of the year, the population of refinance candidates varied by less than 3.0 percent over the final 12 weeks of 2017

• However, the recent spike in interest rates cut the population of borrowers with an interest rate incentive to refinance by nearly 40 percent in 40 days

• 2.65 million potential candidates could still both benefit from and likely qualify for a refinance at today’s rates

• That is the smallest this population has been since late 2008, prior to the initial decline in rates during the recession

• Though the population is only 10 percent off its February 2017 mark, rate/term refinance production could see a more significant impact than this might suggest due to increasing burnout in the market