Total U.S. rail carloads were down 0.3% (2,753 carloads) in February 2018 from February 2017. In what unfortunately seems to have become a pattern, the decline in overall carloads in February was due mainly to declines for coal (down 1.7%, or 5,801 carloads), grain (down 5.3%, or 4,712 carloads), and motor vehicles and parts (down 4.5%, or 3,283 carloads). ... February was another great month for intermodal: weekly average volume was 276,000 containers and trailers, the second highest weekly average for any month in history (behind only October 2017) and easily the highest ever for February. 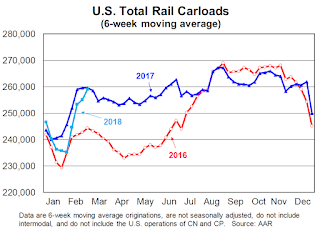 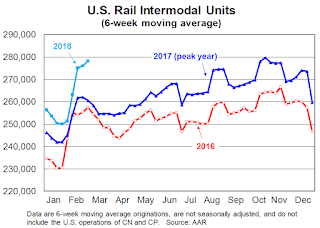