Update: For Fun, Stock Market as Barometer of Policy Success

Note: This is mostly a repeat of a June 2017 post with updated statistics and graph, and one new quote.

There are a number of observers who think the stock market is the key barometer of policy success.  My view is there are many measures of success - and that the economy needs to work well for a majority of the people - not just stock investors. 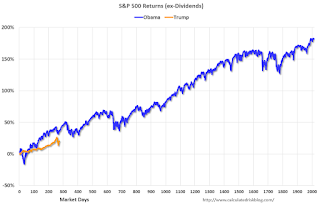