Ten Years Ago: Housing Starts were down Sharply as the Great Recession Started

Single family starts had collapsed significantly, but still had much further to fall. 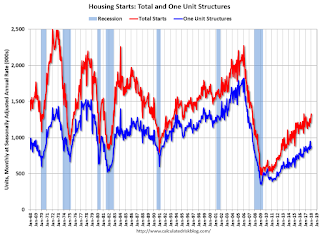 This graph shows total and single unit starts since 1968.

In the latest report, single starts were at 877 thousand SAAR. Well above the recession low, but still fairly low historically.
Posted by Calculated Risk on 2/20/2018 09:41:00 AM
Newer Post Older Post Home