From the MBA: Mortgage Delinquency Rate Up in 4th Quarter; Hurricanes Drive Up 60-Day and 90-Day Delinquencies


The delinquency rate for mortgage loans on one-to-four-unit residential properties increased to a seasonally adjusted rate of 5.17 percent of all loans outstanding at the end of the fourth quarter of 2017.

The delinquency rate was up 29 basis points from the previous quarter, and was 37 basis points higher than one year ago, according to the Mortgage Bankers Association’s (MBA) National Delinquency Survey. The percentage of loans on which foreclosure actions were started during the fourth quarter was 0.25 percent, unchanged from the previous quarter, and three basis points lower than one year ago. Mortgage delinquencies increased across all loan types – FHA, VA and conventional – on a seasonally-adjusted basis.

“The FHA overall delinquency rate in the fourth quarter of 2017 is higher compared to the fourth quarter of 2016 in all but three states. FHA borrowers appear to be impacted not only by the storms but other factors that could be stretching their ability to make payments,” Walsh continued. “Regardless of the hurricanes, an increase in delinquencies - particularly FHA delinquencies - off historic lows is not particularly surprising given the seasoning of the loan portfolio, expected higher interest rates, declining average credit scores on new FHA endorsements since 2014 and rising debt-to-income ratios. Mitigating factors include low unemployment and increasing home equity levels that provide homeowners with more options to cure a potential default.” 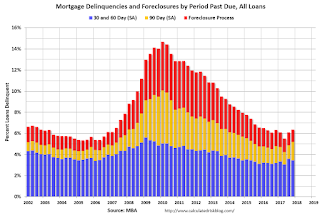 The percent of loans delinquent increased in Q4, primarily due to the hurricanes.

The percent of loans in the foreclosure process continues to decline, and is close to normal levels.
Posted by Calculated Risk on 2/08/2018 10:47:00 AM
Newer Post Older Post Home