Lawler: Will Average Hourly Earnings Growth Decelerate Over the Next Two Months?

From housing economist Tom Lawler: Will Average Hourly Earnings Growth Decelerate Over the Next Two Months?

In its Employment Report for January the BLS reported that average hourly earnings of all private non-farm employees was $26.74 (seasonally adjusted) last month, up 2.9% from a year earlier. This year-over-year gain was up from 2.7% in December and 2.5% in November, and represented the higher YOY increase since May 2009 (though the January YOY gain was only trivially higher than the YOY increase in September of last year (2.832% vs. 2.886%). What few folks have mentioned, however, is that the YOY increase in average hourly earnings for production and non-supervisory workers in the non-farm sector last month was just 2.43%, virtually unchanged from December’s YOY gain.

Obviously, these data imply that the YOY increase in “supervisory” workers accelerated significantly last month, and in fact that was the case: the YOY increase in average hourly earnings of “supervisory” workers (which is not shown in the report but which can be derived) was 3.9% in January, up from 3.3% in December and 3.0% in November. (See chart below). This YOY increase was the highest “on record” though data are only available back to 2006. On a monthly basis the AHE of supervisory employees jumped by 0.8% (seasonally adjusted) in January and 0.5% in December, resulting in annualized growth over this two month period of 8.0%. 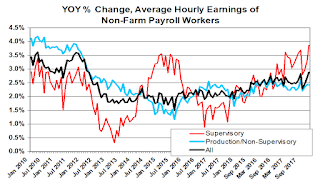 Supervisory workers accounted for about 17.6% of total non-farm payroll workers in January, so if the AHE of supervisory workers were unchanged from January to March (which would imply annualized growth of 3.9% over the four-month period ending in March), and the AHE of production/non-supervisory workers increased at an annualized pace of 2.5% over the next two months (slightly above the recent trend), then the YOY increase in the AHE for all non-farm payroll employees would decline to 2.7% in March from the “scary” 2.9% in January. (February is likely to see a year over year increase of about 2.7% as well).

Inquiring minds might like to know why I spent so much time on why the YOY increase in the AHE in January increased slightly to 2.9%. The reason is that so many “talking heads” have been citing the January “wage report” as one of the major catalysts for the recent turmoil in the stock market. That, of course, seem inane, but it was so widely cited that it got me looking into this.