Business activity continued to expand in New York State, according to firms responding to the February 2018 Empire State Manufacturing Survey. The headline general business conditions index fell five points to 13.1, suggesting a somewhat slower pace of growth than in January. ... Labor market conditions pointed to a modest increase in employment and hours worked.

And from the Philly Fed: February 2018 Manufacturing Business Outlook Survey


Results from the Manufacturing Business Outlook Survey suggest that the region’s manufacturing sector continues to expand in February. ... The index for current manufacturing activity increased 4 points in February to a reading of 25.8. ... The survey’s indicators for labor market conditions suggest a pickup in hiring this month. Over 30 percent of the firms reported increases in employment this month, up from 24 percent in January. The employment index increased 8 points. The firms also reported overall higher average work hours in February, although the workweek index fell 3 points to 13.7.
emphasis added 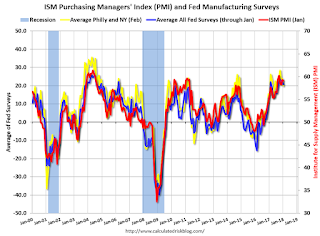