New home sales for January were reported at 593,000 on a seasonally adjusted annual rate basis (SAAR). This was below the consensus forecast, however the three previous months were revised up.

I wouldn't read too much into one month of sales, especially in January. January is usually one of the weakest months of the year for new home sales, on a not seasonally adjusted (NSA) basis - and poor weather this year might have impacted sales a little more than usual. I'd like to see data for February and March before blaming higher interest rates, or a negative impact from the new tax law, as the cause of slower sales. 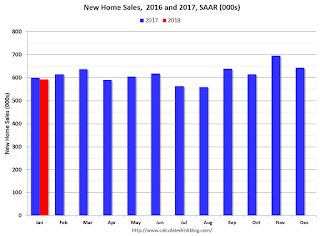 Sales were down 1% year-over-year in January. No worries - yet! 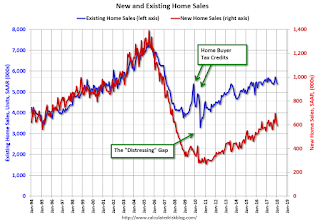 The "distressing gap" graph shows existing home sales (left axis) and new home sales (right axis) through January 2018. This graph starts in 1994, but the relationship had been fairly steady back to the '60s.