Industrial production rose 0.9 percent in December even though manufacturing output only edged up 0.1 percent. Revisions to mining and utilities altered the pattern of growth for October and November, but the level of the overall index in November was little changed. For the fourth quarter as a whole, total industrial production jumped 8.2 percent at an annual rate after being held down in the third quarter by Hurricanes Harvey and Irma. At 107.5 percent of its 2012 average, the index has increased 3.6 percent since December 2016 for its largest calendar-year gain since 2010.

The gain in manufacturing output in December was its fourth consecutive monthly increase. The output of utilities advanced 5.6 percent for the month, while the index for mining moved up 1.6 percent. Capacity utilization for the industrial sector was 77.9 percent, a rate that is 2.0 percentage points below its long-run (1972–2016) average.
emphasis added 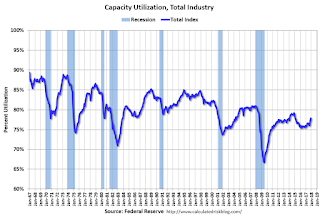 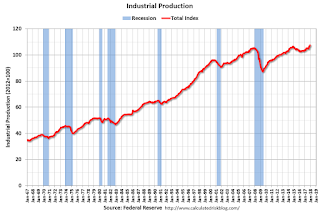