Trade Deficit at $48.7 Billion in October


The U.S. Census Bureau and the U.S. Bureau of Economic Analysis, through the Department of Commerce, announced today that the goods and services deficit was $48.7 billion in October, up $3.8 billion from $44.9 billion in September, revised. October exports were $195.9 billion, down less than $0.1 billion from September exports. October imports were $244.6 billion, $3.8 billion more than September imports. 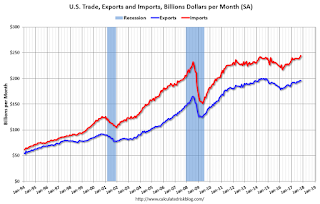 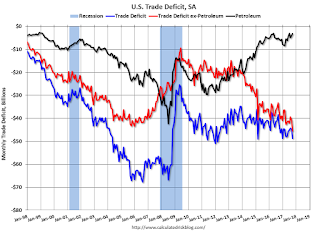 Oil imports averaged $47.26 in October, up from $45.15 in September, and up from $40.03 in October 2016.  The petroleum deficit had been declining for years - and is the major reason the overall deficit has mostly moved sideways since early 2012.