From the Port of Long Beach: Port Surges Past 2016 Cargo Volume


With just under one month left in 2017, the Port of Long Beach has already exceeded the cargo total for all of last year, and will handle more than 7 million containers for only the fourth time in its 106-year history....

“U.S. consumers are confident and the economy has been strong,” said Long Beach Harbor Commission President Lou Anne Bynum. “Retailers have been stocking goods as a result and we are nearing cargo levels we have not seen since before the 2008 recession.”


The Port of Los Angeles moved 924,225 Twenty-Foot Equivalent Units (TEUs) in November, the most containerized monthly cargo the Port has processed during its 110-year history. The previous record of 877,564 TEUs was set in November 2016. 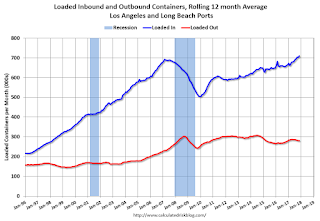 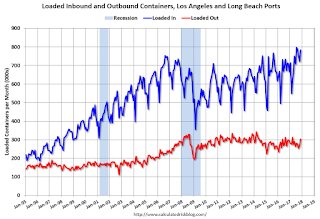 Trade has been strong - especially inbound - and setting record volumes most months recently.  This suggests the retailers are optimistic about the Christmas Holiday shopping season.

In general imports have been increasing, and exports are mostly moving sideways to slightly down recently.
Posted by Calculated Risk on 12/12/2017 03:45:00 PM
Newer Post Older Post Home