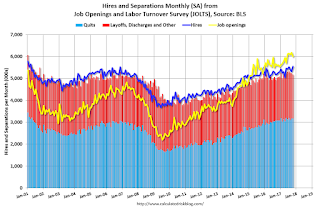 Jobs openings decreased in October to 5.996 million from 6.177 in September.

The number of job openings (yellow) are up 7.3% year-over-year.

Quits are up 3.3% year-over-year. These are voluntary separations. (see light blue columns at bottom of graph for trend for "quits").

Job openings are mostly moving sideways at a high level, and quits are increasing year-over-year.  This is a solid report.
Posted by Calculated Risk on 12/11/2017 10:06:00 AM
Newer Post Older Post Home