This gives a total of 5.12% delinquent or in foreclosure.


Today, the Data & Analytics division of Black Knight, Inc. released its latest Mortgage Monitor Report, based on data as of the end of October 2017. Given the significant impact proposed changes to the tax code could have on the housing and mortgage markets, this month Black Knight explored the impact from the Senate and House versions of tax reform as currently written. As Black Knight Data & Analytics Executive Vice President Ben Graboske explained, proposed changes to the standard deduction, mortgage interest deduction (MID) and capital gains exemptions in particular could put even more pressure on already limited available housing inventory, with ramifications for both current homeowners and prospective buyers.

“Both tax reform proposals double the standard tax deduction, which may, in many cases, provide a greater benefit to renters than to homeowners,” said Graboske. “It may also reduce the tax incentive to purchase a home and generally make the MID less valuable to borrowers. We’ve observed in the past that positive tax incentives can certainly impact home buying decisions – the Black Knight Home Price Index showed clear evidence of this as a result of 2008’s first-time homebuyer tax credit. However, limited data is available to examine the effects of removing an existing tax incentive on borrowers’ purchase behavior. One thing that seems clear is that a reduction of the MID could further constrain available housing inventory, which itself has helped to push home prices even higher in many places. Almost 3 million active first-lien mortgages -- current mortgage holders -- have original balances exceeding $500K -- the cap proposed in the House version of the tax bill. These borrowers would be exempt from the limit. We’ve already seen signs of ‘interest rate lock’ on the market, as homeowners with low interest rate mortgages have a disincentive to sell in a rising rate environment. The question now becomes whether the proposed tax reform adds another layer of ‘tax deduction lock’ on the market. Do these homeowners now also have a disincentive to sell their home in order to keep their current interest rate deduction of up to $1 million? If so, this would potentially add new supply constraints.

“Lower-priced markets may see little effects from these changes, but the most recent Black Knight Home Price Index shows 22 markets nationwide where the median home price is over $500K. Mortgage originations at or above that point have increased by 350 percent since the bottom of the housing market. At the current rate of growth, we could see approximately 480,000 purchase originations in 2018 with original balances over $500K, with an estimated 2.9 million over the first five years of the tax plan. If home prices continue to rise and the cap is left in place, more families in the upper-middle income range could be impacted. Even if interest rates stayed steady around four percent, a $500K MID cap could cost the average homeowner with a larger mortgage an additional $2,600 - $4,200 per year depending on their tax bracket, representing a 6 to 10 percent increase in housing-related expenses as compared to the average annual principal and interest payment today.”

Black Knight also found that proposed changes to the capital gains exemption on profits from the sale of a home (requiring five years of continuous residence as compared to the current two) could impact approximately 750,000 home sellers per year, also potentially increasing pressure on available inventory. Leveraging the company’s SiteX property records database, Black Knight found that on average, over the past 24 months, more than 14 percent of property sales were by homeowners falling into that two-to-five-year window and who would no longer be exempt from capital gains taxation. On average, $60 billion in capital gains each year could be impacted, with a worst-case scenario (taxing the full amount under the highest tax bracket) putting the cost to home sellers at approximately $23 billion. If such homeowners choose to forego or delay selling to avoid a tax liability, this may also further reduce the supply of homes for sale.
emphasis added 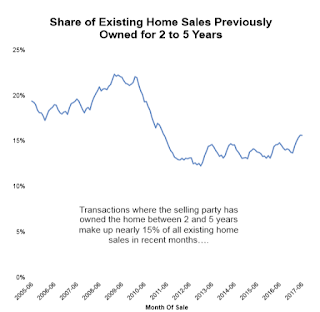 This graphic from Black Knight looks at the percentage of existing home sales owned from 2 to 5 years.


• Currently taxpayers filing jointly can 'exclude' up to $500K of capital gains from the sale of their primary residence (up to $250K for single filers) tax-free, provided they have lived in the property for two years of the preceding five

• Both the House and Senate proposals lengthen the ownership requirement to five of the preceding eight years, and homeowners could only use the tax-free provision once every five years

• Black Knight found that over the past 24 months, more than 14 percent of property sales were by homeowners falling into that two-to-five-year window and who would no longer be exempt from capital gains taxation

• On average, $60 billion in capital gains each year could be affected, with a worst-case scenario (taxing the full amount under the highest tax bracket) putting the cost to home sellers at approximately $23 billion