The primary Case-Shiller indices paint a picture of a national housing market that’s largely stable and maybe even a bit boring from 50,000 feet, with home prices growing at roughly the same pace for the past year or more.

The U.S. National Index for September showed an annual increase in home prices of 6.2 percent. The month-over-month increase from August was 0.7 percent.

But the real action is on the sidelines. Demand is coming first and foremost from buyers in the entry-level and mid-market segments, but available inventory is largely concentrated at the high end – causing the nation’s most affordable homes to grow in value at more than twice the pace of homes at the top of the market. The past two months have shown promising signs of life from builders who have had difficulty meeting intense demand in the face of rising land, lumber and labor prices – but it’s going to take a lot more than two good months to erase a housing deficit accumulated from years of underbuilding.

The year-over-year change for the Case-Shiller National index will be about the same in October as in September.   Zillow is forecasting larger year-over-year increases for both the 10-city and 20-city indexes in October. 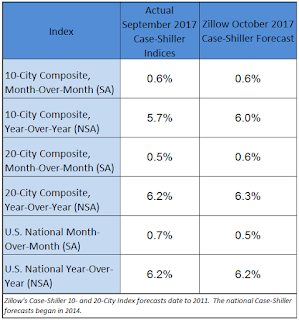