Manufacturing firms reported robust growth in November, according to the latest survey by the Federal Reserve Bank of Richmond. The composite index jumped from 12 to 30, the highest it has been since 1993. This rise was bolstered by strengthening conditions across all three components of the index. While indicators of current wages and finished goods fell in November, both maintained positive values, dropping from 24 to 21 and 14 to 9, respectively.

District manufacturing firms remained optimistic that growth will continue in the coming six months. But a smaller share of firms raised their expectations than had in October in all areas, except for wages and capital expenditures.
emphasis added 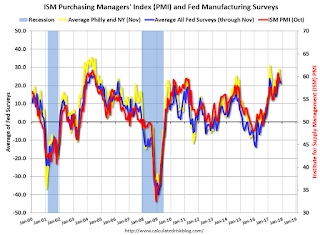 Based on these regional surveys, it seems likely the ISM manufacturing index will be strong again in November (to be released Friday, Dec 1st).
Posted by Calculated Risk on 11/28/2017 10:03:00 AM
Newer Post Older Post Home