The Federal Reserve Bank of Philadelphia has released the coincident indexes for the 50 states for October 2017. Over the past three months, the indexes increased in 40 states, decreased in nine, and remained stable in one, for a three-month diffusion index of 62. In the past month, the indexes increased in 41 states, decreased in seven, and remained stable in two, for a one-month diffusion index of 68.
emphasis added 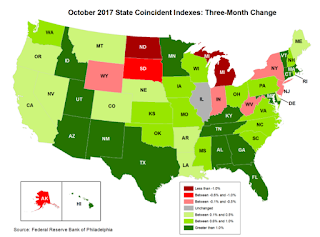 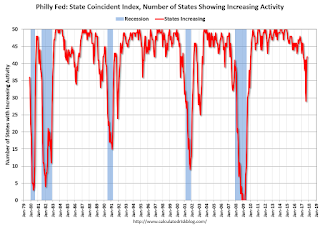 In October, 42 states had increasing activity (including minor increases).

The downturn in 2015 and 2016, in the number of states increasing, was mostly related to the decline in oil prices.

The reason for the mid-2017 sharp decrease in the number of states with increasing activity is unclear.
Posted by Calculated Risk on 11/22/2017 10:49:00 AM
Newer Post Older Post Home