Total nonfarm payroll employment rose by 261,000 in October, and the unemployment rate edged down to 4.1 percent, the U.S. Bureau of Labor Statistics reported today.
...
The change in total nonfarm payroll employment for August was revised up from +169,000 to +208,000, and the change for September was revised up from -33,000 to +18,000. With these revisions, employment was 90,000 higher than previously reported.
...
Average hourly earnings for all employees on private nonfarm payrolls, at $26.53, were little changed in October (-1 cent), after rising by 12 cents in September. Over the past 12 months, average hourly earnings have increased by 63 cents, or 2.4 percent.
emphasis added 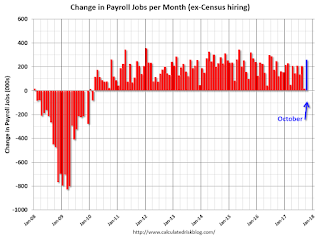 Payrolls for August and September were revised up by a combined 90 thousand.  The upward revision to the September report keeps the record job streak alive! 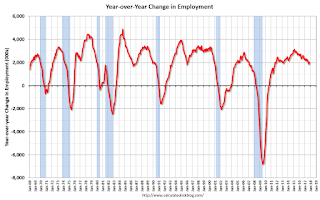 In October the year-over-year change was 2.04 million jobs. 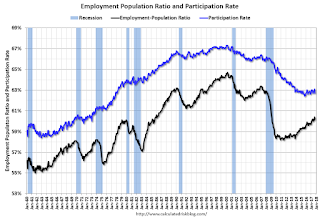 The Labor Force Participation Rate decreased in October to 62.7%. This is the percentage of the working age population in the labor force.   A large portion of the recent decline in the participation rate is due to demographics. 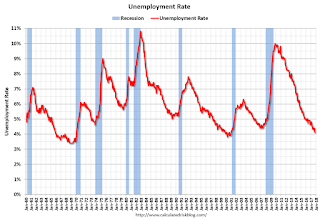 The unemployment rate decreased in October to 4.1%.

This was below expectations of 323,000 jobs, however the previous two months combined were revised up. The headline jobs number was strong - mostly due to a bounce back from the impact of the hurricanes - and the unemployment rate declined further.  However wages were weak.