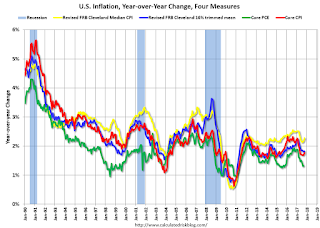 Using these measures, inflation picked up year-over-year in October.  However, overall, these measures are mostly below the Fed's 2% target  (Median CPI is slightly above).
Posted by Calculated Risk on 11/15/2017 11:29:00 AM
Newer Post Older Post Home