From HotelNewsNow.com: STR: US hotel results for week ending 18 November


The U.S. hotel industry reported positive year-over-year results in the three key performance metrics during the week of 12-18 November 2017, according to data from STR.

In comparison with the week of 13-19 November 2016, the industry recorded the following:

Note: The hurricanes continues to drive demand in Texas and Florida, especially in Houston. 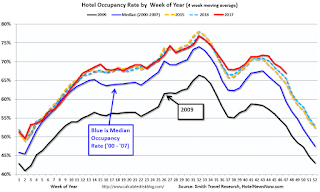 Currently the occupancy rate, to date, is ahead of the record year in 2015.  The hurricanes will probably push the annual occupancy rate to a new record in 2017.