Regional manufacturing activity continued to expand in November, according to results from this month’s Manufacturing Business Outlook Survey. The indexes for general activity and shipments fell from their October readings but remained positive, while the survey’s index for new orders rose. The employment index fell but remained elevated. Almost all of the future indicators rose, and firms continue to expect growth in both activity and employment over the next six months.
...
The diffusion index for current manufacturing activity in the region remained positive but decreased from a reading of 27.9 in October to 22.7 in November. The index has been positive for 16 consecutive months. ... Firms continued to report increases in employment, though at a slower pace relative to last month. While the current employment index has been positive for 12 consecutive months, it fell 8 points to 22.6 in November.
emphasis added 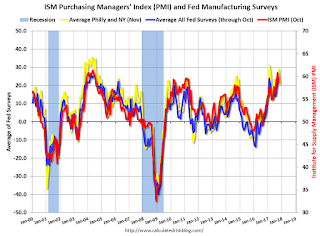