The number of quits was little changed at 3.2 million in September. The quits rate was 2.2 percent. The number of quits was little changed for total private and for government. Quits rose in professional and business services (+82,000) and state and local government, excluding education (+10,000). Quits fell in other services (-45,000) and real estate and rental and leasing (-16,000).
...
Hurricane Irma made landfall in Florida during September, the reference month for the preliminary estimates in this release. All possible efforts were made to contact and collect data from survey respondents in the hurricane-affected areas. A review of the data indicated that Hurricane Irma had no discernible effect on the JOLTS estimates for September.
emphasis added 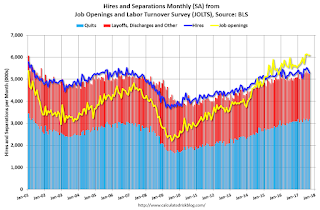 Jobs openings increased slightly in September to 6.093 million from 6.090 in August.

The number of job openings (yellow) are up 7.5% year-over-year.

Quits are up 3.5% year-over-year. These are voluntary separations. (see light blue columns at bottom of graph for trend for "quits").

Job openings are mostly moving sideways at a high level, and quits are increasing year-over-year.  This is another strong report.
Posted by Calculated Risk on 11/07/2017 10:07:00 AM
Newer Post Older Post Home