Texas factory activity expanded at a faster pace in October, according to business executives responding to the Texas Manufacturing Outlook Survey. The production index, a key measure of state manufacturing conditions, rose six points to 25.6 and reached its highest reading since April 2014.

Other measures of current manufacturing activity also indicated a pickup in growth. The new orders index climbed six points to a 10-year high of 24.8, and the growth rate of orders index moved up to 12.3. The capacity utilization index also pushed to its highest level in a decade at 22.5. Meanwhile, the shipments index moved down several points but remained positive and at a well-above-average level of 20.9.

Labor market measures suggested solid employment growth and longer workweeks this month. The employment index came in at 16.7, unchanged from September and still well above average. Less than 5 percent of firms noted net layoffs—something that has only been seen five other times since the start of the survey more than 13 years ago. The hours worked index moved down but remained positive at 13.7, indicating a continuing lengthening of workweeks.
emphasis added 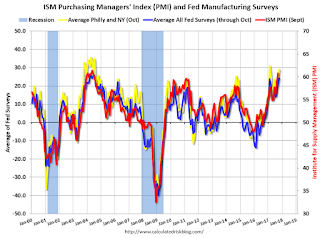 Based on these regional surveys, it seems likely the ISM manufacturing index will be strong again in October (to be released Wednesday, Nov 1st).
Posted by Calculated Risk on 10/30/2017 10:40:00 AM
Newer Post Older Post Home