Total U.S. rail carloads were down 2.3% (24,106 carloads) in September 2017 from September 2016, their third straight monthly decline following eight straight monthly gains. Those eight months of gains usually involved double-digit percentage gains in carloads of coal, but over the past couple of months, comparisons to last year have become much more difficult for coal. In September, in fact, coal carloads were down compared with last year, their first decline in 10 months. ... Intermodal had a good September: the last two weeks of September were the two top intermodal weeks in history for U.S. and Canadian railroads. U.S. intermodal volume in September was up 3.8% (39,482 units) over last September; for the first nine months, intermodal was up 3.5% (348,784 units) in 2017 over 2016. 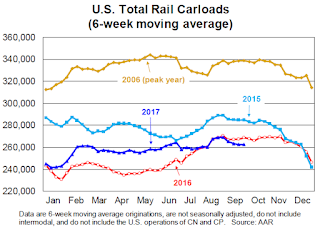 
U.S. railroads originated 1,044,563 carloads in September 2017, down 24,106 carloads, or 2.3%, from September 2016. Average weekly carloads of 261,141 in September 2017 were the fewest for September since sometime prior to 1988, when our data begin. September was the third straight year-over-year monthly decline in total carloads following eight straight increases. 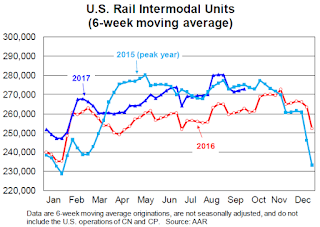