New home sales for September were reported at 667,000 on a seasonally adjusted annual rate basis (SAAR). This was well above the consensus forecast, and the highest sales rate since October 2007. The three previous months were revised up slightly.

There was clearly some rebound following hurricane Harvey. Sales in the South were up sharply from August, and at the highest level since July 2007. Some contracts in the South, that would have been signed in August, were probably delayed until September.  Also some people who lost homes might have signed contracts for new homes in September (New home sales are counted when contracts are signed).

Sales were up 17.0% year-over-year in September. 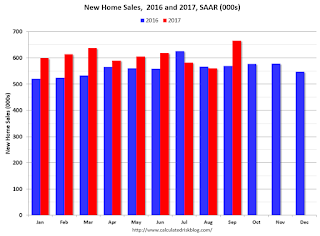 This was a solid year-over-year increase through September. 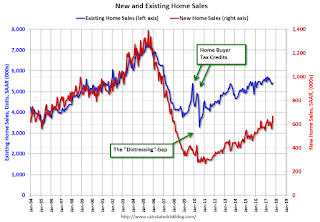 The "distressing gap" graph shows existing home sales (left axis) and new home sales (right axis) through September 2017. This graph starts in 1994, but the relationship had been fairly steady back to the '60s. 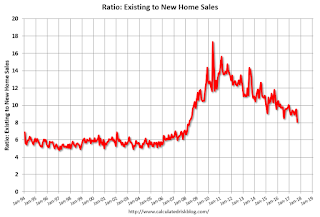