From HotelNewsNow.com: STR: US hotel results for week ending 9 September


The U.S. hotel industry reported positive year-over-year results in the three key performance metrics during the week of 3-9 September 2017, according to data from STR.

In comparison with the week of 4-10 September 2016, the industry recorded the following:

Among the Top 25 Markets, Houston, Texas, reported the largest year-over-year increases in each of the three key performance metrics. Amid the aftermath of Hurricane Harvey, occupancy rose 66.1% to 86.6%, ADR was up 23.9% to US$114.27 and RevPAR surged 105.9% to US$98.91. STR analysts note that hotels in the market filled up with displaced residents, FEMA workers and other demand related to recovery efforts.
...
Ahead of Hurricane Irma landfall, Miami/Hialeah, Florida, saw the week’s largest drop in occupancy (-20.2% to 50.9%) and the largest decrease in RevPAR (-25.5% to US$65.55).
emphasis added 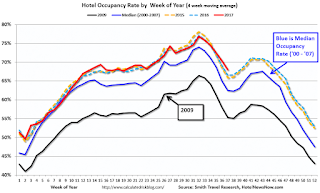