The Chemical Activity Barometer (CAB), a leading economic indicator created by the American Chemistry Council (ACC), remained virtually unchanged in September despite the effects of unprecedented Hurricanes Harvey and Irma. Though future revisions are likely, the barometer slipped just 0.04 percent in September, following a 0.03 percent decline in August. Compared to a year earlier, the CAB is up 2.8 percent year-over-year, a marked pullback from recent year-over-year gains. All data is measured on a three-month moving average (3MMA) basis.

On a year-over-year basis, the unadjusted CAB is up 2.3 percent, also an easing from the previous six months.
...
Applying the CAB back to 1912, it has been shown to provide a lead of two to fourteen months, with an average lead of eight months at cycle peaks as determined by the National Bureau of Economic Research. The median lead was also eight months. At business cycle troughs, the CAB leads by one to seven months, with an average lead of four months. The median lead was three months. The CAB is rebased to the average lead (in months) of an average 100 in the base year (the year 2012 was used) of a reference time series. The latter is the Federal Reserve’s Industrial Production Index.
emphasis added 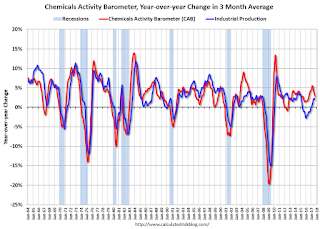 CAB increased solidly in early 2017 suggesting an increase in Industrial Production, however, the year-over-year increase in the CAB has slowed recently.
Posted by Calculated Risk on 9/19/2017 01:38:00 PM
Newer Post Older Post Home