According to the Federal Reserve Bank of Cleveland, the median Consumer Price Index rose 0.2% (2.0% annualized rate) in July. The 16% trimmed-mean Consumer Price Index also rose 0.2% (1.8% annualized rate) during the month. The median CPI and 16% trimmed-mean CPI are measures of core inflation calculated by the Federal Reserve Bank of Cleveland based on data released in the Bureau of Labor Statistics' (BLS) monthly CPI report. 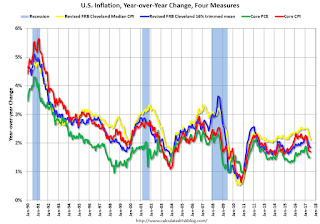 This graph shows the year-over-year change for these four key measures of inflation. On a year-over-year basis, the median CPI rose 2.1%, the trimmed-mean CPI rose 1.9%, and the CPI less food and energy rose 1.7%. Core PCE is for June and increased 1.5% year-over-year.

Using these measures, inflation was soft again in July.  Overall these measures are mostly below the Fed's 2% target  (Median CPI is slightly above).
Posted by Calculated Risk on 8/11/2017 11:16:00 AM
Newer Post Older Post Home