From HotelNewsNow.com: STR: US hotel results for week ending 29 July


The U.S. hotel industry reported positive year-over-year results in the three key performance metrics during the week of 23-29 July 2017, according to data from STR.

In comparison with the week of 24-30 July 2016, the industry recorded the following: 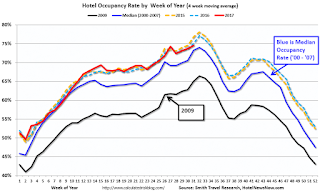 Currently the occupancy rate is tracking close to last year, and slightly behind the record year in 2015.

Seasonally, the occupancy rate will remain strong over the next month and then decline into the Fall.