Manufacturing conditions in the region continued to advance in August, according to firms responding to this month’s Manufacturing Business Outlook Survey. The diffusion index for general activity fell slightly but continued to reflect growth. There was a notable improvement in the new orders and shipments indexes, and overall employment expansion continued among the reporting firms. The survey’s indexes of future activity indicate that firms expect a continuation of growth in the region’s manufacturing sector over the next six months.

The survey’s broadest measure of manufacturing conditions, the diffusion index of current activity, fell slightly from 19.5 in July to 18.9 in August. The index has been positive for 13 consecutive months ... The survey’s indicators for labor market conditions suggest modest growth in employment. The percentage of firms reporting increases in employment (15 percent) was greater than the percentage reporting decreases (5 percent). The employment index held near steady at 10.1. Firms also reported overall increases in average work hours in August, and the workweek index was positive for the 10th consecutive month.
emphasis added 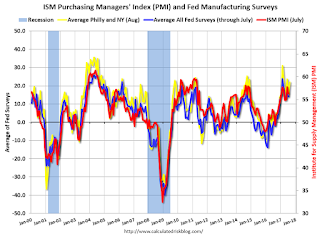 This suggests the ISM manufacturing index will show somewhat faster, and solid expansion in August.
Posted by Calculated Risk on 8/17/2017 10:36:00 AM
Newer Post Older Post Home