Heavy truck sales really collapsed during the great recession, falling to a low of 181 thousand in April and May 2009, on a seasonally adjusted annual rate basis (SAAR). Then sales increased more than 2 1/2 times, and hit 479 thousand SAAR in June 2015.

Heavy truck sales declined again - probably mostly due to the weakness in the oil sector - and bottomed at 352 thousand SAAR in October 2016. 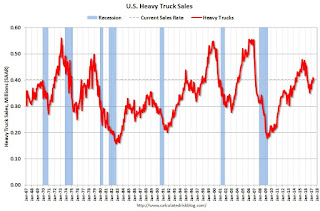 With the increase in oil prices over the last year, heavy truck sales have been increasing too.