U.S. rail traffic in June 2017 was a mix of the good and the not so good. The good included intermodal, which was up 4.6% in June and 2.7% (179,515 containers and trailers) for the year to date. Year to-date intermodal volume through June was the highest ever. On the carload side, coal was up 13.2% in June and up 18.0% (326,783 carloads) for the first half. The first half of 2016 was a ridiculously bad period for coal, so the comparisons this year were pretty easy. As we go forward in 2017, the comps for coal will get much tougher. Carloads of crushed stone, gravel and sand were 18.5% higher in June and 12.8% higher in the first half. Thanks to surging sand shipments, this category set a year-to-date record this year. Year-to-date carloads of chemicals thorugh June were the highest ever too. The not so good included petroleum and petroleum products (down 15.2% in June, their 25th straight year-over-year decline) and motor vehicles and parts (down 7.9% in June for combined U.S. and Canadian carloads, their sixth straight monthly decline to match the six straight months in which new light vehicle sales have fallen). Total carloads in June 2017 were up 4.4% over last year; total carloads in the first half of 2017 were up 6.4% (404,078 carloads) over last year. 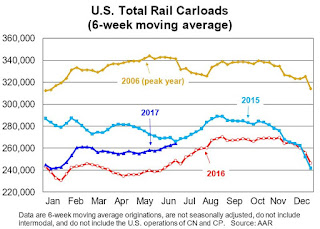 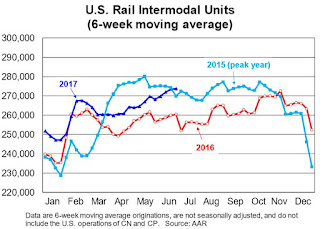 
U.S. railroads originated 1,113,575 containers and trailers in June 2017, up 4.6% (49,425 units) over June 2016 and the second-best June in history in terms of weekly average volume (slightly behind 2015). In June, the number of intermodal units originated by U.S. railroads exceeded the number of carloads for the ninth straight month. The first time that ever happened was May 2015, but it’s common now.