Shaking off a sluggish first quarter, the apartment market showed marked improvement in the second quarter as all but two of 79 metros saw effective rents increase or stay flat in the quarter. The average effective rent grew 1.1% in the quarter and 3.0% over the year. The vacancy rate increased from 4.3% to 4.4%

Vacancy increased in 27 Metros, but the increase exceeded 0.2% in only eight metros. The number of new completions was lower than had been expected as was net absorption.

The growth in effective rents suggests that landlords’ offers of free rent were less aggressive as the apartment market continued to benefit from stronger housing prices keeping more potential home buyers in rentals.

Total inventory is expected to increase significantly in 2017; however, construction in the second quarter was lower than expected in a quarter that tends to see the highest activity. New construction of 36,477 units was the lowest quarterly addition in more than two years. With less new supply coming online, landlords were able to curb their concessions.

At 4.4%, the national vacancy rate increased 10 basis points from 4.3% in the first quarter. One year ago, the vacancy rate was 4.2%. Occupancy growth, or net absorption, while low at 27,818 units, fell just shy of new supply pushing the vacancy rate up in the quarter.
emphasis added 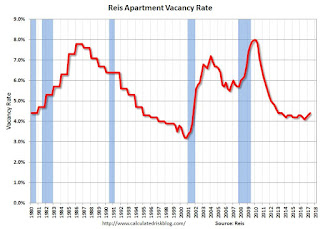