The following data is calculated from the Fed's Flow of Funds data (released today) and the BEA supplement data on single family structure investment. This is an aggregate number, and is a combination of homeowners extracting equity - hence the name "MEW" - and normal principal payments and debt cancellation (modifications, short sales, and foreclosures).

For Q1 2017, the Net Equity Extraction was a negative $7 billion, or a negative 0.02% of Disposable Personal Income (DPI) .  Note that seasonally, Q1 is the usually the weakest quarter of the year equity extraction. 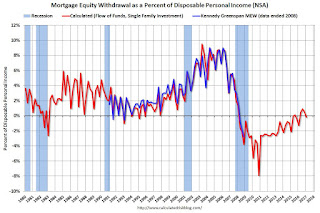 The Fed's Flow of Funds report showed that the amount of mortgage debt outstanding increased by $44 billion in Q4.

The Flow of Funds report also showed that Mortgage debt has declined by $1.22 trillion since the peak. This decline is mostly because of debt cancellation per foreclosures and short sales, and some from modifications. There has also been some reduction in mortgage debt as homeowners paid down their mortgages so they could refinance.

With a slower rate of debt cancellation, MEW will likely be positive going forward.