Dallas Fed: "Texas Manufacturing Expansion Picks Up Pace" in May

From the Dallas Fed: Texas Manufacturing Expansion Picks Up Pace


Texas factory activity increased at a faster pace in May, according to business executives responding to the Texas Manufacturing Outlook Survey. The production index, a key measure of state manufacturing conditions, moved up eight points to 23.3, reaching its highest level since April 2014.

Other measures of current manufacturing activity also rose to levels not seen since mid-2014. The new orders index pushed up to 18.1, and the growth rate of orders index rose to 12.3, marking its fifth consecutive positive reading. The capacity utilization index moved up to 19.4, with roughly a third of firms noting increased utilization. The shipments index surged 15 points to 24.7, reaching a level not seen in nearly 10 years. 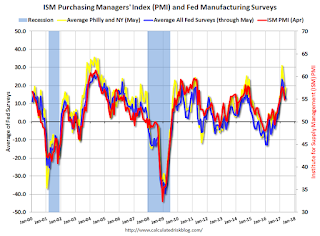 It seems likely the ISM manufacturing index will be mostly unchanged or decline slightly in May, but still show solid expansion (to be released on Thursday).
Posted by Calculated Risk on 5/30/2017 12:29:00 PM
Newer Post Older Post Home