Notes: This CoreLogic House Price Index report is for March. The recent Case-Shiller index release was for February. The CoreLogic HPI is a three month weighted average and is not seasonally adjusted (NSA).

From CoreLogic: CoreLogic US Home Price Report Shows Prices Up 7.1 Percent in March 2017


Home prices nationwide, including distressed sales, increased year over year by 7.1 percent in March 2017 compared with March 2016 and increased month over month by 1.6 percent in March 2017 compared with February 2017, according to the CoreLogic HPI.
...
“Home prices posted strong gains in March 2017, and the CoreLogic Home Price Index is only 2.8 percent from its 2006 peak,” said Dr. Frank Nothaft, chief economist for CoreLogic. “With a forecasted increase of almost 5 percent over the next 12 months, the index is expected to reach the previous peak during the second half of this year. Prices in more than half the country have already surpassed their previous peaks, and almost 20 percent of metropolitan areas are now at their price peaks. Nationally, price growth has gradually accelerated over the past half-year, while rent growth for single-family rental homes has slowly decelerated over the same period, according to the CoreLogic Single-family Rental Index, recording a 3 percent rise over the year through March.”

“A potent mix of strong job gains, household formation, population growth and still-attractive mortgage rates in the face of tight inventories are fueling a continuing surge in home prices across the U.S.,” said Frank Martell, president and CEO of CoreLogic. “Price gains were broad-based with 90 percent of metropolitan areas posting year-over-year gains. Major metropolitan areas were especially hot with CoreLogic data indicating that four of the largest 10 markets are now overvalued. Geographically, gains were strongest in the West with Washington showing the highest appreciation at almost 13 percent, and Seattle, Tacoma and Bellingham posting gains of 13 to 14 percent.
emphasis added 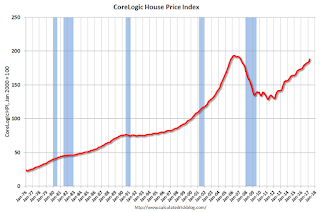 This index is not seasonally adjusted, and this was another strong month-to-month increase.

The index is still 2.8% below the bubble peak in nominal terms (not inflation adjusted). 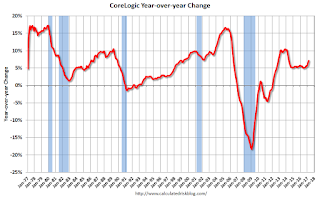 The second graph shows the YoY change in nominal terms (not adjusted for inflation).

The YoY increase had been moving sideways over the last two years, but might have picked up recently (the recent pickup could be revised away).

The year-over-year comparison has been positive for five consecutive years since turning positive year-over-year in February 2012.
Posted by Calculated Risk on 5/02/2017 09:29:00 AM
Newer Post Older Post Home