Led by improvements in production-related indicators, the Chicago Fed National Activity Index (CFNAI) rose to +0.49 in April from +0.07 in March. Two of the four broad categories of indicators that make up the index increased from March, and only one category made a negative contribution to the index in April. The index’s three-month moving average, CFNAI-MA3, increased to +0.23 in April from a neutral reading in March.
emphasis added 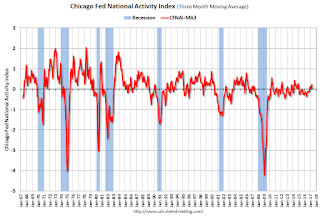 This suggests economic activity was above the historical trend in April (using the three-month average).