Despite dire reports of store closures in major brands across the country, the overall retail real estate statistics recorded very little change in the quarter as the neighborhood and community shopping center vacancy rate held steady at 9.9%, unchanged from year-end 2016 as well as from the first quarter of 2016. The average national asking rent increased 0.3% in the first quarter while effective rents, which net out landlord concessions, increased 0.4%.

Vacancy stayed flat in the quarter due to very low new retail construction. At 796,000 square feet, construction was the lowest since 2011. Net absorption, or the growth in occupancy, was also low at 1.25 million square feet.
emphasis added 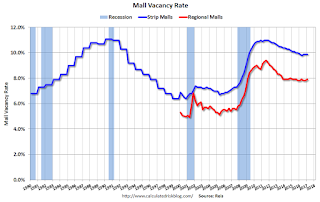 Currently, both the strip mall and regional mall vacancy rates are mostly moving sideways at an elevated level.