Results from the March Manufacturing Business Outlook Survey suggest that regional manufacturing activity continued to expand. The diffusion index for general activity fell from its high reading in February, but the survey’s other broad indicators for new orders, shipments, and employment all improved or were steady this month. Price pressures also picked up, according to reporting firms. The survey’s future indicators continued to improve and reflect a broadening base of optimism about future growth in manufacturing.
...
The index for current manufacturing activity in the region decreased from a reading of 43.3 in February to 32.8 this month. The index has been positive for eight consecutive months and remains at a relatively high reading ...
...
Firms reported an increase in manufacturing employment and work hours this month. The percentage of firms reporting an increase in employment (25 percent) exceeded the percentage reporting a decrease (8 percent). The current employment index improved 6 points, its fourth consecutive positive reading. Firms also reported an increase in work hours this month: The average workweek index, which increased 5 points, has been positive for five consecutive months. 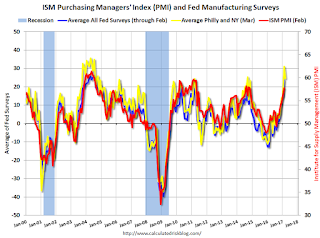