Mortgage applications increased 5.8 percent from one week earlier, according to data from the Mortgage Bankers Association’s (MBA) Weekly Mortgage Applications Survey for the week ending February 24, 2017. This week’s results included an adjustment for the Presidents’ Day holiday.

... The Refinance Index increased 5 percent from the previous week to its highest level since December 2016. The seasonally adjusted Purchase Index increased 7 percent from one week earlier. The unadjusted Purchase Index decreased 1 percent compared with the previous week and was 5 percent lower than the same week one year ago, which did not include the Presidents’ Day holiday.
...
The average contract interest rate for 30-year fixed-rate mortgages with conforming loan balances ($424,100 or less) decreased to 4.30 percent from 4.36 percent, with points increasing to 0.38 from 0.35 (including the origination fee) for 80 percent loan-to-value ratio (LTV) loans.
emphasis added 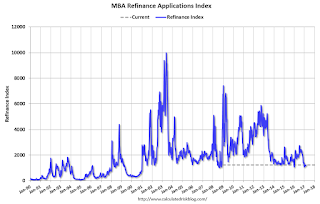 It would take a substantial decrease in mortgage rates to see a significant increase in refinance activity. 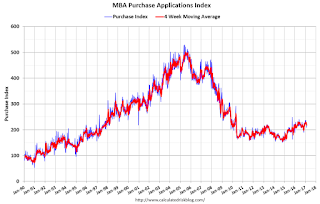 Even with the recent increase in mortgage rates, purchase activity is still holding up.

However refinance activity has declined significantly since rates increased.
Posted by Calculated Risk on 3/01/2017 07:00:00 AM
Newer Post Older Post Home