Building Permits:
Privately-owned housing units authorized by building permits in February were at a seasonally adjusted annual rate of 1,213,000. This is 6.2 percent below the revised January rate of 1,293,000, but is 4.4 percent above the February 2016 rate of 1,162,000. Single-family authorizations in February were at a rate of 832,000; this is 3.1 percent above the revised January figure of 807,000. Authorizations of units in buildings with five units or more were at a rate of 334,000 in February.
emphasis added 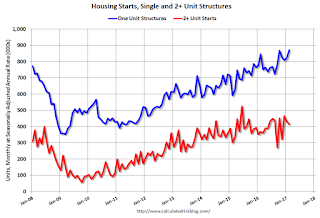 Multi-family is volatile, and the swings have been huge over the last six months.

Single-family starts (blue) increased in February, and are up 3.2% year-over-year.

This is the highest level for single family starts since 2007. 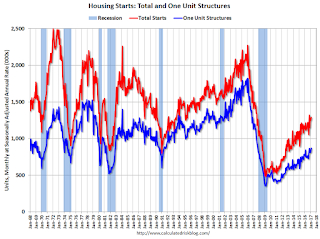 Total housing starts in February were above expectations.  December and January were revised slightly.  Another solid report.  I'll have more later ...
Posted by Calculated Risk on 3/16/2017 08:45:00 AM
Newer Post Older Post Home