Small business optimism rose again in January to its highest level since December 2004, suggesting that the post-election surge has staying power, according to the monthly National Federation of Independent Business (NFIB) Index of Small Business Optimism, released today.
...
The Index reached 105.9 in January, an increase of 0.1 points. The uptick follows the largest month-over-month increase in the survey’s history. Five of the Index components increased and five decreased, but many held near their record high.
...
[T]he seasonally adjusted average employment change per firm posting a gain of 0.15 workers per firm, the best reading since September 2015 and historically, a strong showing. ... Fifty-three percent reported hiring or trying to hire (up 2 points), but 47 percent reported few or no qualified applicants for the positions they were trying to fill. Fifteen percent of owners cited the difficulty of finding qualified workers as their Single Most Important Business Problem (up 3 points).
emphasis added 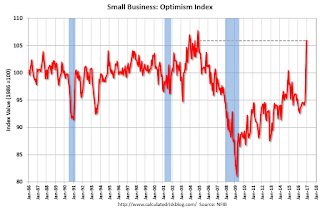 This graph shows the small business optimism index since 1986.

The index increased to 105.9 in January.