California has been enduring a five year drought, but it keeps raining in SoCal and snowing in the mountains this year.  For much of the state, the drought is over.

Here are a few resources to track the rain and snow.

And for Los Angeles, here is a historical table of annual rainfall. After five years of significantly below average rainfall, this year is well above normal and the rain is still falling.

This is good news for the state and the state economy. 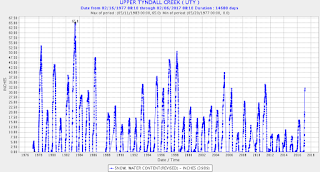 For Pacific Crest Trail and John Muir Trail hikers, I recommend using the Upper Tyndall Creek sensor to track the snow conditions. This graph shows the snow water content for Upper Tyndall Creek for the last 40 years. Note: I hiked the trail in September 1998 - a very wet year - and there was snow all year on Mt. Whitney.

There were four very dry years in a row, and then last winter was a little better - but still below normal.

For the Tyndall Creek area, this is the fifth wettest year in the last 20 years - and it is still early February!