Gary Cohn and the Participation Rate

A Bloomberg article from December had some comments from Gary Cohn, the White House National Economic Council Director: Cohn in His Own Words


The published U.S. unemployment rate “is a very, very fictitious rate. It’s only that low because the participation rate has gone downward...”

“The participation rate really measures people out in the U.S. population that are looking for jobs. There are so many people who are frustrated looking for jobs that they’ve just stopped. If the participation rate normalized -- this is a fun fact -- if it normalized to Day 1 of the Obama administration, we’d still be at an 11 percent plus unemployment rate.” -- July 2015

This is not a "fun fact", it is complete nonsense.

First, Cohn obviously ignored his own economic research at Goldman Sachs. In March 2016, Goldman Sachs economist David Mericle wrote:  "At this point, we see the cyclical “participation gap” as nearly closed."  If most of the cyclical gap is closed, then the remaining decline was due to demographics and long term trends.

Lets look at the participation rate trend for two young male cohorts, those 16 to 19 years old, and those 20 to 24 years old. 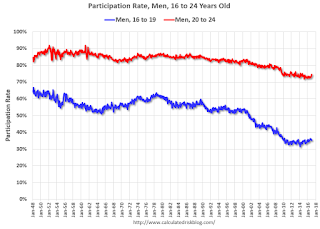 Note: For simplification, I used men only for this graph.  It is more complicated for women because there was a significant increase in women participating in the labor force in the '60s, '70s, and '80s due to changing societal norms.

There has been a down trend that for both the "16 to 19" and "20 to 24" year old male cohorts that preexisted the recent recession.  This is because more people are staying in school (a long term positive for the economy).  This pushed down the overall participation rate - especially since there were large cohorts recently in these age groups.

Another key trend has been the aging of the baby boomers.  This is a little more complicated because we have to look at two factors - the participation rate for older workers, and the number of people in each cohort.

And the cohort in the 55 to 59 age group in 2007 has seen their participation rate decline from 71.9% to 31.8%.  These people are retiring (being able to retire is a positive for an individual).

A careful analysis suggests that almost all of the decline in the overall participation rate over the last decade is related to demographics and long term trends.