There were no special factors impacting this week's initial claims. This marks 96 consecutive weeks of initial claims below 300,000, the longest streak since 1970.
emphasis added 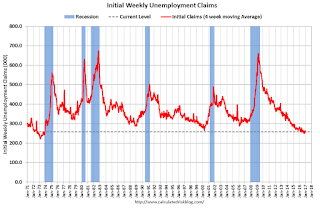 
The dashed line on the graph is the current 4-week average. The four-week average of weekly unemployment claims decreased to 256,750.

This was well below the consensus forecast (it is difficult to seasonally adjusted during the holidays). The low level of claims suggests relatively few layoffs.
Posted by Calculated Risk on 1/05/2017 08:33:00 AM
Newer Post Older Post Home