The key report this week is the January employment report on Friday.

Other key indicators include the January ISM manufacturing and non-manufacturing indexes, and January auto sales.

The FOMC meets on Tuesday and Wednesday, and no change to policy is expected.

10:00 AM: Pending Home Sales Index for December. The consensus is for a 0.6% increase in the index.

10:30 AM: Dallas Fed Survey of Manufacturing Activity for January. This is the last of the regional Fed surveys for January. 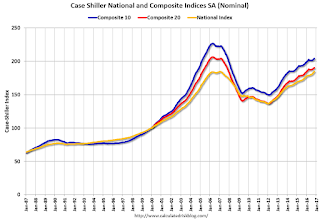 9:00 AM ET: S&P/Case-Shiller House Price Index for November. Although this is the November report, it is really a 3 month average of September, October and November prices.

This graph shows the nominal seasonally adjusted National Index, Composite 10 and Composite 20 indexes through the October 2016 report (the Composite 20 was started in January 2000).

9:45 AM: Chicago Purchasing Managers Index for January. The consensus is for a reading of 55.2, up from 54.6 in December. 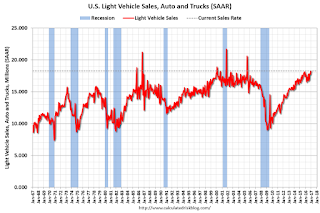 8:15 AM: The ADP Employment Report for January. This report is for private payrolls only (no government). The consensus is for 168,000 payroll jobs added in January, up from 153,000 added in December. 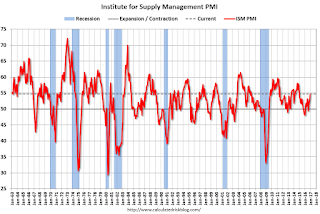 The ISM manufacturing index indicated expansion at 54.7% in December. The employment index was at 53.1%, and the new orders index was at 60.2%.

10:00 AM: Construction Spending for December. The consensus is for a 0.2% increase in construction spending.

2:00 PM: FOMC Meeting Announcement. No change to FOMC policy is expected at this meeting.

8:30 AM ET: The initial weekly unemployment claims report will be released.  The consensus is for 253 thousand initial claims, down from 259 thousand the previous week.

The consensus is for the unemployment rate to be unchanged at 4.7%. 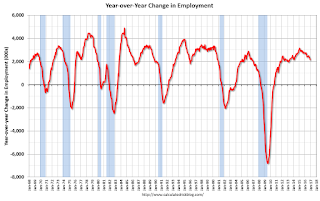 In December, the year-over-year change was 2.16 million jobs.

10:00 AM: Manufacturers' Shipments, Inventories and Orders (Factory Orders) for December. The consensus is a 0.9% increase in orders.