Showing continued resiliency, the national apartment vacancy rate declined to 4.1% from 4.2% in the third quarter and 4.3% at year-end 2015. Although net absorption (occupancy growth) was the lowest level in more than two years, new construction was also weaker. The fourth quarter statistics ... confirm that the pace of new completions has slowed after soaring over the last few years. Rent growth decelerated as well to a rate of 0.3% in the fourth quarter. Although the fourth quarter usually sees the lowest growth rates of the year, this quarter's results were the lowest since 2009.
...
Looking ahead, while new construction is expected to exceed demand (occupancy growth), we do not foresee a spike in vacancy rates. As mentioned above, recently surveyed data shows that the pace of completions has slowed while net absorption has stayed healthy. This means that prospective home buyers have not abandoned the apartment market as rapidly as many had thought would do so by this stage of the expansion.
emphasis added 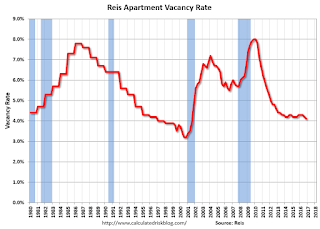